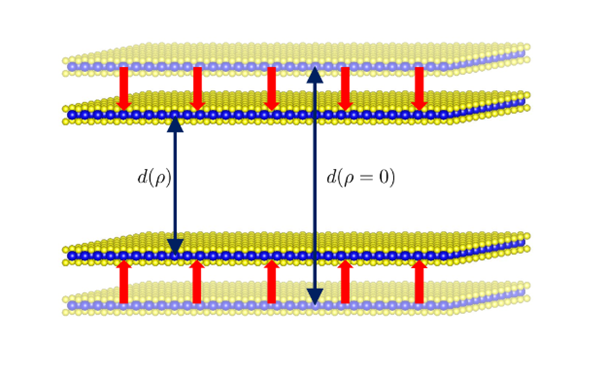 Ever wondered what happens if you stack two TMDs (Transition Metal Dichalcogenides) on top of each other? Well, depending on the electron/hole density, there’s an attractive force between the two layers. Such system is currently well-understood. Now what if one included weak disorder into the system? Jonas decided to investigate this.

We usually expect disorder to enhance interactions in such systems (mainly disorder tends to enhance the importance of Coulomb interactions in Fermi Liquids). Surprisingly, this is not the case here. We found out that disorder not only decreases the interactions between these two layers, but it does so in a neat manner. Thus, we generated a power law that captures how the force behaves asymptotally. Said power law fits nicely into the observed asymptotic behavior during the transgression from metallic to insulating behavior.

Our paper was published in Phys. Rev. B, you can find out more about it in the link below.