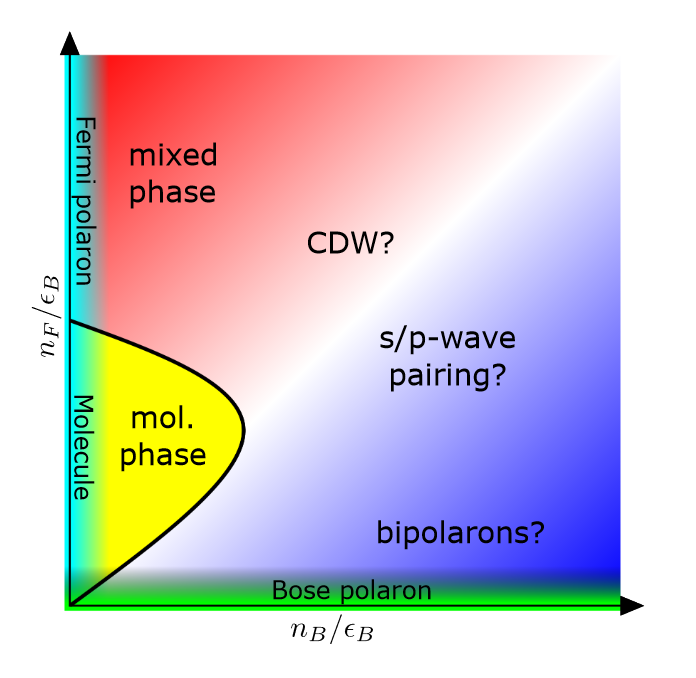 What does the phase diagram of Bose-Fermi mixtures look like in two dimensions? This question remained, until now, largely unexplored, so we, Jonas, Félix, and Richard decided to delve into that. Most current research conducted in this direction omits to consider bound-state-physics. However, in 2D, we know that said states are paramount.

We studied 2D Bose-Fermi mixtures, including bound states, by considering the polaron to molecule transition which occurs in a certain limit: when one has a boson density that is very small compared to the fermion density. Within this limit, there is a transition from the polaron to the molecule. Expanding from that limit, we reach a regime where we have a finite density of bosons to inspect where exactly the phase transition between the molecular fermi liquid and the mixed phase occurs.

Along the way there were many hurdles we had to overcome, among which the fact that reproducing the polaron-to-molecule transition in 2D is far from easy! To circumvent this, we included a three-body correlation to reproduce the transition. Naturally, this was necessary because when one wants to study the system in the limit of small boson density then one has to at least reproduce the polaron-to-molecule transition. We then extended our theory to include a small but finite boson density in order to study the phase diagram.

From there on, we develop our theory and extend it to finite density.