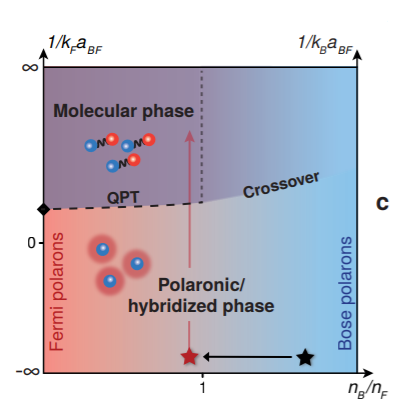 Jonas, Xing-Yan and Richard have a new preprint on ArXiv titled “Transition from a polaronic condensate to a degenerate Fermi gas of heteronuclear molecules”!

The interplay of quantum statistics and interactions in atomic Bose–Fermi mixtures leads to a phase diagram markedly different from pure fermionic or bosonic systems. However, investigating this phase diagram remains challenging when bosons condense. Here, we observe evidence for a quantum phase transition from a polaronic to a molecular phase in a density-matched degenerate Bose–Fermi mixture. The condensate fraction, representing the order parameter of the transition, is depleted by interactions and the build-up of strong correlations results in the emergence of a molecular Fermi gas. By driving through the transition, we ultimately produce a quantum-degenerate sample of sodium-potassium molecules exhibiting a large molecule-frame dipole moment of 2.7 Debye. The observed phase transition represents a new phenomenon complementary to the paradigmatic BEC-BCS crossover observed in Fermi systems.

New preprint: Transition from a polaronic condensate to a degenerate Fermi gas of heteronuclear molecules